FARWELL TO A MUCH LOVED VENUS BAY COMMUNITY MEMBER

On Wednesday 26th May we were lucky enough to go to Doug Grigg’s farewell dinner held at the Men’s Shed. Doug was the Treasurer of the Venus Bay Angling Club for many years and an important and valued member of our club. He is re-locating to northern Victoria to be closer to family and to enjoy the warmer weather. From the accolades he received tonight he will obviously be missed by all the community. We wish you all the very best Doug.

The annual easter egg hunt was back on this year. It was held at and around the club rooms this year due to COVID number restrictions at the VB community centre.
As usual it was a resounding success, with all having a great time!

ELECTION OF THE 2021 COMMITTEE
The secretary read out the nominations he had received for office bearers and ordinary committee members:

Unfortunately none of the winning members were at the meeting to accept presentation of them, they will be available for them to collect from the Club Shed when advised.

When the official meeting closed a BBQ was held for those who attended. Thanks to Terry Shelly for cooking the BBQ and all who helped with dishes and packing up the hall.

On the Monday of the Labour Day weekend from 8am to 4pm, a small group of members personned (we need to be politically correct here!) the sausage sizzle at Wonthaggi Bunnings.
Many thanks to Tony and Ann Marie Swinden, Kevin Field, Tony and Barb Bryant and John and Olga Hutt for all your hard work!! A sucessful fundraising effort for our club!
We hope to do a few more of these through the year. We encourage all members to consider helping at these events, as funds raised benefit all members…………….

Heaviest Elephant Fish – None weighed in

OFFICERS AND ORDINARY COMMITTEE MEMBERS FOR 2020:

The President Announced that formal elections were not needed this year and passed onto the Secretary to explain further.

The Secretary Read out the nominations he had received for office bearers and ordinary committee members:

Ordinary Members – John Hutt, Lindsay Jowett, Tony Swinden and Doug Don.
He then announced that as the number of nominations equaled the number of positions required, elections were not needed and declared that the committee for 2020 be as per the nominations.

Work has finally started on the renovations of the Venus Bay jetty.
Here are some photos taken by Tony Swinden in April and May.

As with all comp weekends, the club held it’s usual BBQ on Saturday night. And as usual we held a raffle with Joe doing a great job selling the tickets for us – thanks Joe!!
We would like to thank everyone who attended, and to those members who donated prizes for the raffle.
We would like to say a very special “thank you” to club members Prem and Vianca Nath of ARMA Window Tinting, for their very generous donation of a car window tint voucher to the value of $495. This great prize was won by Phil and Lisa Russell.
The club also held the annual Easter Egg hunt at the community centre on Sunday morning.  This was very well attended by members and the wider community. Many thanks to all who helped with all the work on the day.

The AGM was held at the Venus Bay Community Centre on Saturday 5th January, 2019.

Tony Swinden handed over the reins of the presidency to Kevin Field. The committee and members would like to thank Tony for his dedication and hard work during his time in charge. The new committee structure looks like:

Also, Christos Kostakos has agreed to help out as deputy weigh master. He is happy for members to drop in any day (at a reasonable time) if they have fish for the heaviest fish category outside comp weekends.

Another important part of the night was the presentation of trophies for the year of 2018. Results are as follows:

It is with sadness that we advise long-term serving member, past committee member and treasurer, John Blezzard, passed away at approx. 10pm on Tuesday night. He was in hospital with his two daughters by his side.

The funeral will be held on Tuesday 15th January at the Tarwin Lower Church Hall, commencing 12 noon.

John’s daughters invite his fellow club members and friends to come back to Gerald’s shed after the service to reflect on John’s passing.  There will be food and drinks provided. 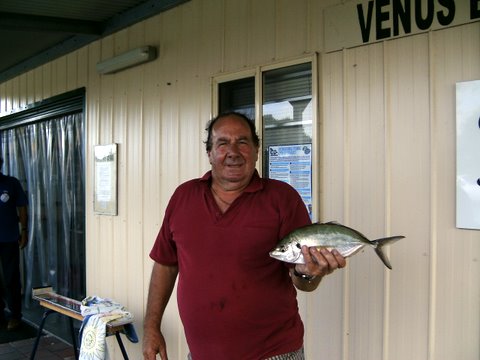 On Monday 17th September the president, Treasurer and Secretary of the club met with officers of the South Gippsland Shire Council and their consultant at the condemned Jetty to finalise the size and positioning of the new Fishing and Boating access Jetty. This will be in the form of a floating pontoon with an access ramp located from the concrete path which leads to  the  existing condemned Jetty.

The agreed size of the pontoon was 24 metres long (equally divided for boats and anglers) by 2.5 metres wide with hand rails along the side facing the near shore bank (sizes are subject to availability from the pontoon manufacturer).

Gippsland Ports have provided the Council with survey data of the water levels at various distances from the bank – at extreme low and high tides so as to position the pontoon where it will give the longest periods of water availability for boating and fishing activities with the tidal constraints we have there.

An application has been made for a grant for the project, which includes the adding of a buffer between the 2 sides of the boat launching ramp, which will prevent boats being blown into each other when strong winds gust unexpectedly.

The club has submitted a letter of support for the grant.

Applications for the necessary permits from various Government bodies for the demolition of the existing Jetty, installation of the new pontoon, attachment to the bank and modification to the ramp have been made by the council and their replies are being patiently awaited for so the work can begin.

As usual there was a four day competition for the Easter long weekend.  Mostly favourable weather conditions meant a number of members (and non-members) were out there either in boats on the inlet or along the rivers and beaches dangling a line.  Well done to all who participated!

Our annual Easter Egg Hunt was held at the Venus Bay Community Centre, and as usual there was a great turn-out.  The children gathered in the centre for colouring in activities while the Easter Bunny visited outside.  They were then let loose on the gardens outside the centre to hunt out the offerings left by the Easter Bunny.  Always a lot of fun for all!!

Many thanks to the committee and general club members who gave up their own Easter Sunday morning to make this event possible again!

The AGM was held at the Venus Bay Community Centre on Saturday 6th January, 2018.  The turnout was disappointingly less this year – perhaps due to the extremely hot weather?!  Despite this fact a good time was had by those who did attend.

Terry Shelly and Michelle Godfrey vacated their positions, however, only two members nominated for to take their places, therefore there was no election held. The new committee structure looks like:

Another important part of the night was the presentation of trophies for the year of 2017. Results are as follows:

Not only is the warmer weather lovely, but it certainly means the appearance of our fisher folk again.  It also means more come out to socialise.  We had a great turn out for our Saturday night BBQ.  As always thanks to the gents who cooked and thanks to all for the lovely dishes brought along to share.  A great time was had by all!

Ben Griscti and partner Natalie welcomed a beautiful little girl into the world on Wednesday 13th September.  Baby Isabella and parents happy and well.  Grandpa Joe – over the moon!!!  Congratulations to the Griscti family.

If anyone else has an announcement or news to share with fellow members, please email me at amgodfrey@aussymate.com

The Venus Bay Angling Club had a busy time throughout Easter this year. We had our usual 4 day fishing comp, ran a sausage sizzle on Saturday at the end of the Tour de Tarwin, had our BBQ on Saturday night and hosted our annual Easter Egg hunt on Sunday morning at the Venus Bay Community Centre. The committee heartily thank all who gave up their time to help with the running of these events!!

Here are some photos of the weekend’s activities…….

The AGM was held at the Venus Bay Community Centre on Saturday 7th January, 2017.  There were approximately 60 people in attendance on this very warm night.

As the only nominations received were from the existing committee, there was no election held. The onlyslight change was Tony Swinden and Terry Shelly swapping positions.  Committee structure is now as follows:

Another important part of the night was the presentation of trophies for the year of 2016. Results are as follows:

The committee were delighted to present Ian and Anne McIntyre life membership as much-deserved thanks  for services to the club over the past 15+ years.

On the Friday just before New Years’ eve, those who could gathered at “Gerald’s Shed” to say farewell to much-loved and long-time member, Maureen Batt.

Maureen has relocated to be with Elise, Paul and Chloe in Cockatoo. We wish Maureen and her family much love and happiness and hope that they will be able to still come to visit.

We will miss seeing you sitting at the outside table with a smoke and a can on Friday nights Maureen!!!